By Stephen Wynn-davies For Mailonline

This is the moment a distracted driver crashed into a family home, narrowly missing four dogs and causing extensive damage.

The incident happened in Gallup, New Mexico, on October 25 at the home of Ana and Ryan Hudgeons who, fortunately, were not there at the time.

Footage captured by surveillance cameras both inside and outside the property shows a white truck crashing through the yard before smashing into the side of the house and through the living room.

Mrs Hudgeons said she was told by police that the driver was ‘speeding and distracted when the crash happened’.

The badly damaged home of Ana and Ryan Hudgeons in Gallup, New Mexico after a white pick-up truck smashed through the living room wall on October 25

The external camera shows the white pick-up truck travelling at considerable speed as it smashes through the bushes and gates in the front yard of the property.

The vehicle also narrowly misses family dog Olie, who dashes clear after apparently being asleep on a chair when the truck hurtled in.

The truck smashes into the side of the house with a loud bang, leaving a trail of destruction behind. 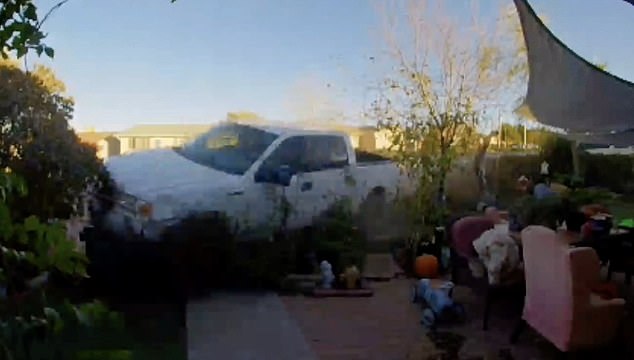 Ana, her husband Ryan Hudgeons and their young child were not at home at the time of the crash but their four dogs were and they narrowly avoided being hit

An alternative angle from inside the Hudgeons’ living room shows three other dogs – Kava, Zora and Roko – lounging on the sofa.

Alerted by the noise of the truck crashing through the yard fence and gates, the three dogs jump up moments before the vehicle smashes into the corner of the living room, making a gaping hole.

The truck wrecks the corner of the room as Kava, Zora and Roko, unharmed, run further into the house for safety. 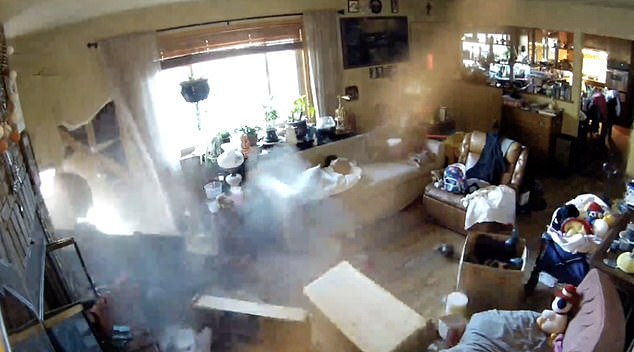 The pick-up smashes into the wall of the living room where dogs Kava, Zora and Roko had been lounging on the sofa moments earlier

Speaking after the incident, Ana Hudgeons said, despite the extensive damage, the crash could have been a lot worse if she, her husband Ryan and their daughter had been home at the time.

Gallup Fire Marshal Jon Parrett told KOB4 that their daughter been playing in the yard when the crash happened ‘it could have ended her life’.

He reminded drivers: ‘A split second looking at your phone or making a phone call or sending a text, it could change somebody else’s life.

‘A second of being distracted could change someone’s life forever.

‘Luckily there was nobody home at the time.’

Mr Parrett said the occupants of the pickup truck suffered minor injuries but refused transport to the hospital. 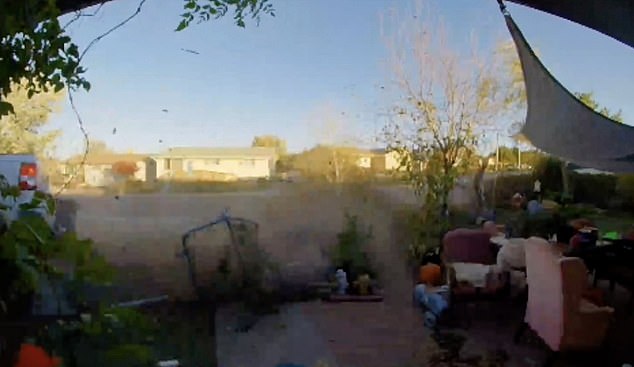 The Hudgeons’ other dog Olie had been sleeping on a chair in the garden when the truck crashed through. The rear of the white pick up truck can be seen on the left as it smashes into the house

Mrs Hudgeons, who runs a photography business from the house, said ‘priceless heirlooms were destroyed’ in the crash.

She added: ‘I came home to see that my entire fence line was gone and there was a gaping hole in our house on the side.

‘I literally didn’t know – the shock was great. I just couldn’t believe what I was seeing.’

Mr Parrett said they had not wanted anybody to sleep in the house and ‘and made sure that they had a place to stay for that night’.

Since the incident, a fundraising page has been set up to support the ‘beautiful family’ and has so far raised more than $1,600.