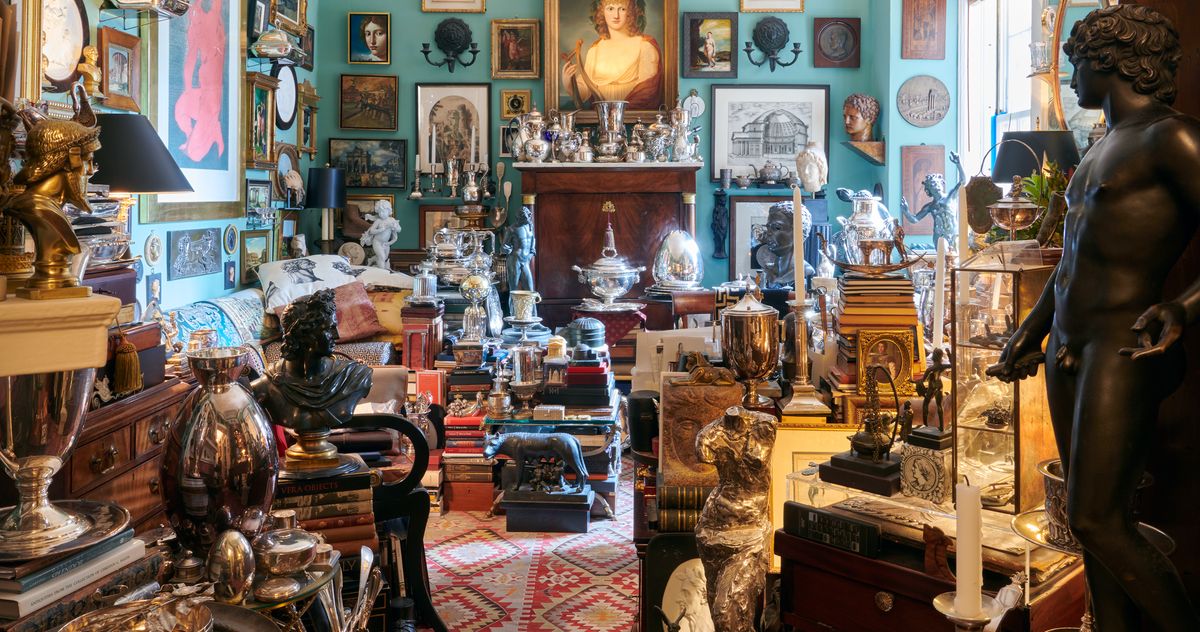 The Living Room: The secretary by the back wall is Charles X, found in Baltimore. The painting above of the lyre player (possibly Bacchus) is French Empire. The headless sculpture in the foreground is a Jim Dine silver Venus. The etching over the sofa is by Sandro Chia.
Photo: Jason Schmidt

I’d never even heard of a strigil before my visit to the ceramicist Thomas Lollar’s apartment. But there I was, standing in his living room — an orderly jumble of all manner of curiosities, including Roman keys; a traveling sundial; silver Italian Futurist objects; a Georgian English Paul Storr tureen; and a pair of silver entrée dishes belonging to the Duke of Cumberland, brother of King George III — holding a 2,000-year-old bronze grooming device that looks like an archaic shoehorn. Lollar explained that strigils were used in ancient Greece and Rome to scrape off dirt, sweat, and the oil that was applied before bathing. “Some scholars think that perhaps physicians would pick up the dead skin cells and use them to repair wounds,” he tells me as I examine the curved blade he’d taken off a nearby wall.

Lollar’s fascination with the past is part of his present-day curriculum teaching studio art at Columbia University’s Teachers College, where he has been on the faculty since 1988. Eight years after taking that position, while also working at Lincoln Center as director of visual arts, he bought this 500-square-foot one-bedroom, attracted by its unusual layout and very high ceilings, in a prewar building nearby.

He’s been filling it up with what interests him ever since — to the point where it’s hard to imagine he’d ever find room for more. And yet he does. He is interested particularly in “utilitarian objects, handled by the people of the time,” he says. “Ancient hand mirrors, silver spoons, cutlery, and utensils such as the patera: a saucepanlike object sometimes worn by soldiers for eating in the theater of battle.”

The impetus for his collecting was a visit to his uncle in Cornwall, England, as a teenager. “I was gardening one day, and I found a silver medallion that had the date of 1706 on it,” he says, “and that made me very interested in medallions commemorating great events in culture and history.” He’s since amassed close to 400 of them in bronze and silver.

Lollar brings in pieces from his collection to show his students. “They are making objects, so what will those objects say about the period in which they are creating them? What can we learn about the objects that were made in other eras, and what do they say about the history of that time?” Everything in his apartment tells a story about long-ago everyday lives. “I collect ancient mirrors,” Lollar says, holding up an Etruscan one that would have been highly polished bronze when new. “Reflection in the ancient world had a different meaning than today. It was a rare experience to see one’s image 2,000 years before the introduction of plate glass or cheap mirrors as we know them today. To see one’s reflection in an ancient Roman mirror is haunting when realizing that someone 2,000 years ago was doing the same thing!”

His own sculptures (in collaboration with Ricardo Arango) are inspired by those very old hand mirrors and will be exhibited at the Venice Biennale next year. These days, Lollar makes his work in a studio in Riverdale. But he lives amid his collection. The kitchen off the entry hall is barely noticeable, and the oven has never been turned on; in fact, it’s hard to make out where the oven is. And lest you think he’s slowed down, during our shoot for this story, Lollar held up an 18th-century French lock he said he recently found in a junk shop and gleefully reported that it still worked. “I don’t know what I am going to do with this,” he mused, surveying the rooms. Minutes later, it had found its place in the entryway, hanging by a collection of keys that range from Roman to 19th century.

It has never been used for preparing or cooking food.

Fornasetti plates cover the walls. The fragment of the 1748 Nolli map of Rome on the ceiling was applied by hand by Lollar, who made a copy of it in an architect’s office, had it printed on large sheets, then cut it “in various ways. When I take a bath, I walk through sections of Rome. Before the pandemic, I spent a month a year in Rome.”

Lollar’s desk is early-19th-century English; he pulls out a drawer and puts a stiff place mat down to create a writing surface. It reminds him of “lunches at Lincoln’s Inn Fields, in London, across from where I was studying and next to the John Soane house museum.”

Gothic Cabinet Craft custom made the bed, designed by Lollar to fit perfectly into his small bedroom, where every inch of wall has been used.

Thank you for subscribing and supporting our journalism.
If you prefer to read in print, you can also find this article in the October 25, 2021, issue of
New York Magazine.

Want more stories like this one? Subscribe now
to support our journalism get unlimited access to our coverage.
If you prefer to read in print, you can also find this article in the October 25, 2021, issue of
New York Magazine.

Design editor Wendy Goodman takes you inside the city’s most exciting homes and design studios.


By submitting your email, you agree to our Terms and Privacy Notice and to receive email correspondence from us.